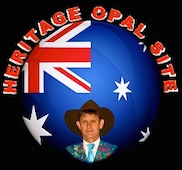 Opals from Graham’s official Government Heritage opal mine location, next to famous opal discovery that produces Australia’s official federal symbol the gemstone opal. Graham’s place is in the same area as the Guinness book of record opal about 50m away, location at 3 mile rd Lightning Ridge and now with official government Heritage listing, because the quality of 3 mile opal mine’s, is the best quality opals ever discovered.

Video Given To Me From Claim Holder Terry Barklay, But Terry Was Not Working That Day The Team Discovered This Famous Halley’s Comet Opal.

Terry passed away at the very start of this millennium and his brother Lantz that work with him and live with him in the Main Street not far from the Newtown hotel or Nobby’s in Lightning Ridge Australian passed away not long after. 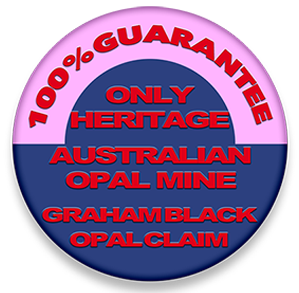 Halley’s comet opal discovered about 50 meters from Graham opal hunter claim at 3 mile Lightning Ridge Australia.  The famous gemstone discovered in 1986 at three mile Lightning Ridge in the State of N.S.W Australia,the Halley’s Comet Opal is one of the largest uncut black opal discovered in modern times with few flaws 13.99 ounces 396.50 grams 1982.5 carats mostly green color on dark black blue. 0.63 in 1.6 cm thick color bar natural shaped color bar has been faced polished a little bit. Barclay brothers who held the least to the mine and Gary who provided the earth moving equipment wanted $1.2 million once optioned in Japan for $6,000,000,000 but never made the price and was handed in. Measures 66 x 63 millimeters or 4 x 2 5/8 x 2 1/2 in.1986 Halley’s Comet could be seen from Earth as the opal resembled the comet it was simply named.

Video viewing the uncut black opal for the first time after 110 million year’s underground, the gemstone was retrieved from beneath a very old workout mine, Old Terry used to walk passed it for many years unto he decided to gamble and open cut.

YouTube video below shows the last famous opal mine being open cut at Graham’s mine a stones throw from where the famous Halley’s comet Guinness book of record opal gemstone was discovered at the three mile lunatic hill mines.
Famous opals 3 mile Heritage mines in Australia at Lightning Ridge, Halleys Comet opal and the Opal hunter mine”List as an item of environmental heritage in LEP National Trust of Australia Register”.

Photograph of Halley’s Comet Opal and the mine at Lightning Ridge Australia. 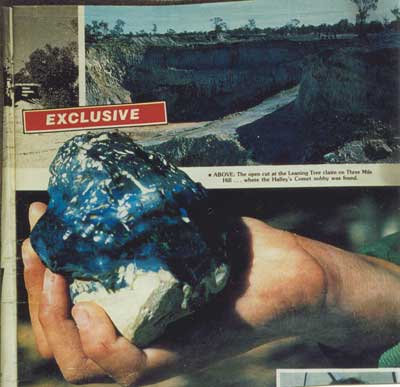 Image Halley’s comet opal and also image of the 3 mile mine of Terry Barklay where the gemstone was discovered.

Two brothers who owned the claim finally uncovered this 100 million year old black opal by getting involved with a local company that provided all the earth moving machinery and finances to undertake such a huge open cut mine, “I should know as I open cut the claim next to the Guinness book of record opal in 1998”. The Brother’s passed away not long after each other and was quite a tragic and sad finished to particularly the oldest of the two brothers Terry as the guys were very respected in town by the whole community as well as all the prospectors around the the opal fields .

The adjoining claims to the famous Halley’s comet opal mine the leaning tree claim, about 100 m away the famous Scots mine, that big Bill Williams open cut. Not far away was one called the revolver claim and the Opal hunter claim which Graham open cut and still have the legal rights to mine today. These days there is a protected order over all these claims to preserve for future generations in the State of New South Wales capital city Sydney Australia . For all gemstones lovers official State Museum is under construction, multimillion dollar Australian Opal Centre at the three mine just out of the township of Lightning Ridge opposite the Opal hunters claim and between the 3 mile flat and lunatic Hill . The Museum will have highly renowned Sydney Paleontologist and will have an exhibition of many rare opal fossil dinosaurs. 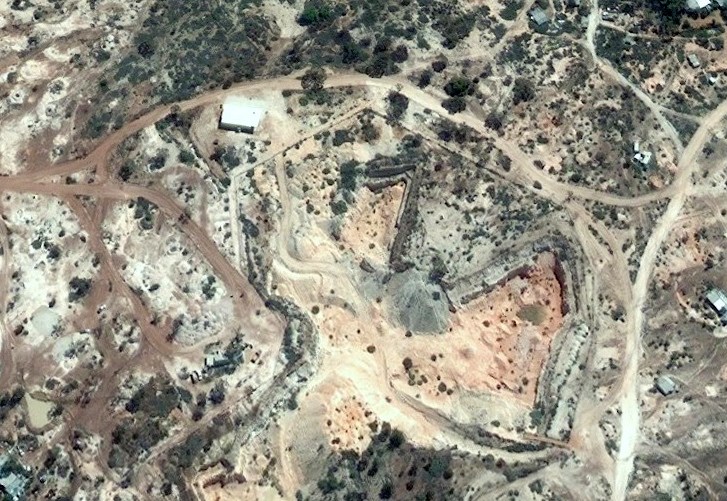 Halleys comet opal Guinness book of world Records mine is next door to Graham Black opal mine.

Graham is a custom jeweler wholesale, and opal prices direct from his famous Australian mine direct from the miner at wholesale prices.

First Australian’s been dated back to about around 40,000 years, prior the first European arrival in Australia in 1770, the many aboriginal indigenous tribes are very tall very dark skin people that hunted naked, their theory dreamtime legend.  Numerous legends and tales surround this colorful gemstone which can be traced back in its origins to a time ancient lost time of the first Australian’s.   Their legends God came down to Australian on a rainbow to bring peace to all the indigenous tribes where God touched the ground. The opal became alive with all the colors of the rainbow spectrum, iridescent multi colors light green and dark green of jade the dark blue and light blue of sapphires, with the red color of spindle gemstones, topaz beautiful blue, the pink color of tourmaline, opal crystals colors as clear as diamonds opals can have all these colors yellow and the exotic black opal, green colors like emerald, red like garnets, white like pearls and the most beautiful color of all dark pigeon red ruby color superlative brilliance multicolors fire sparkling rainbow the dreamtime legend it was the birth of this gemstone. 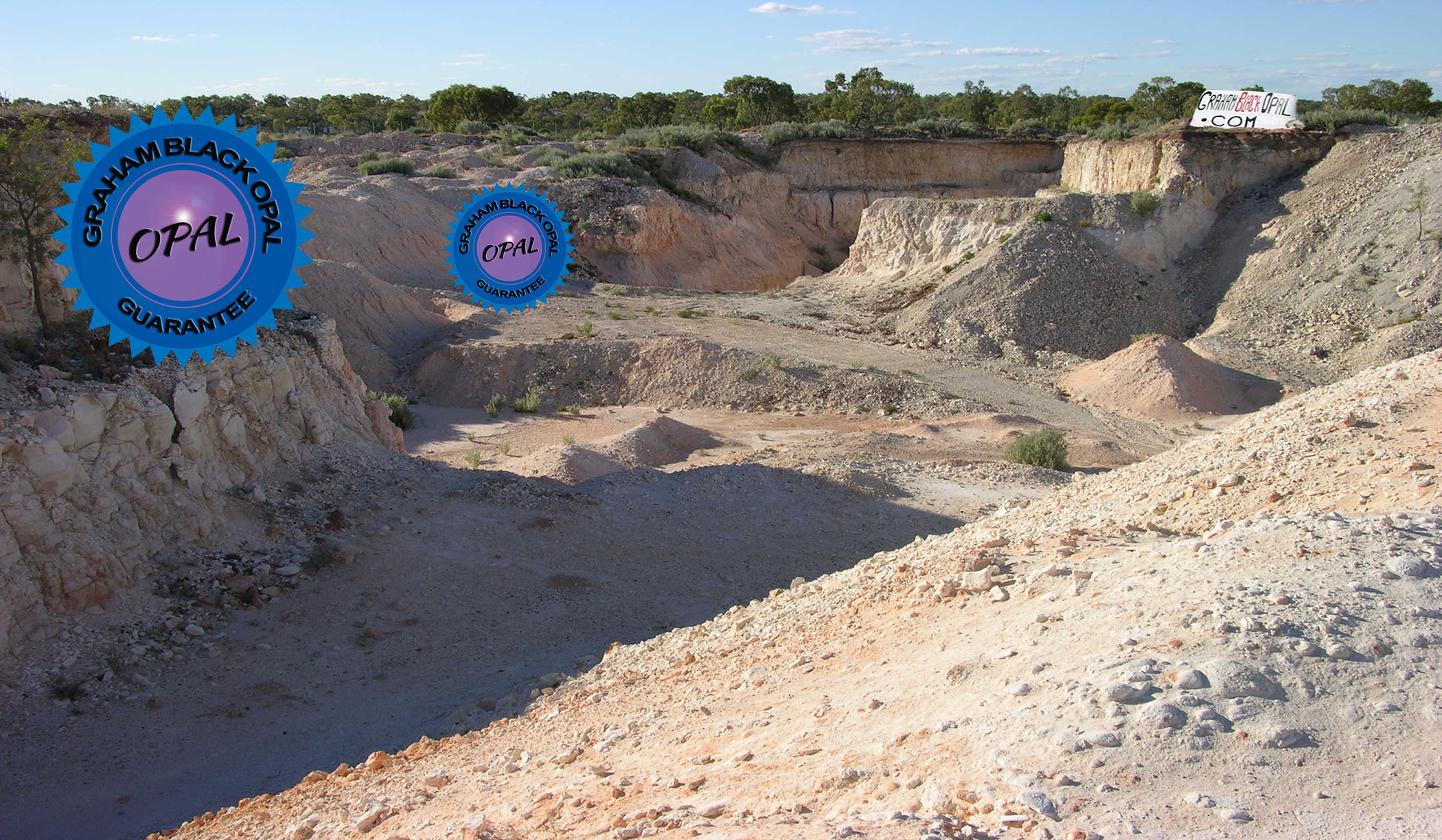 Graham’s opals come from this mine the only working Heritage mine, left at 3 mile lightning ridge Australia. The mine is next-door to where the famous Halleys comet opal was discovered.

The first British and European prospectors pioneers explores that heard about the rare multicolor that sparkled dazzling red fire from rocks and stones, travelled to these locations and started the first opal mining fields. Hard men it was all blood sweat and tears in the semi-arid deserts no fresh water most of the year, stinking hot summers and cold winters, all backbreaking work by hand. No machinery, candle lighting shovels and picks and a hand held windless to wind up a bucket of clay from the bottom of the shaft. A cable was connected to the bucket back to the handheld windless that have to be rotated 360° many times by manpower to allow the bucket to come to the surface under intense heat, image above is very near where the Halley’s Comet Opal was found. 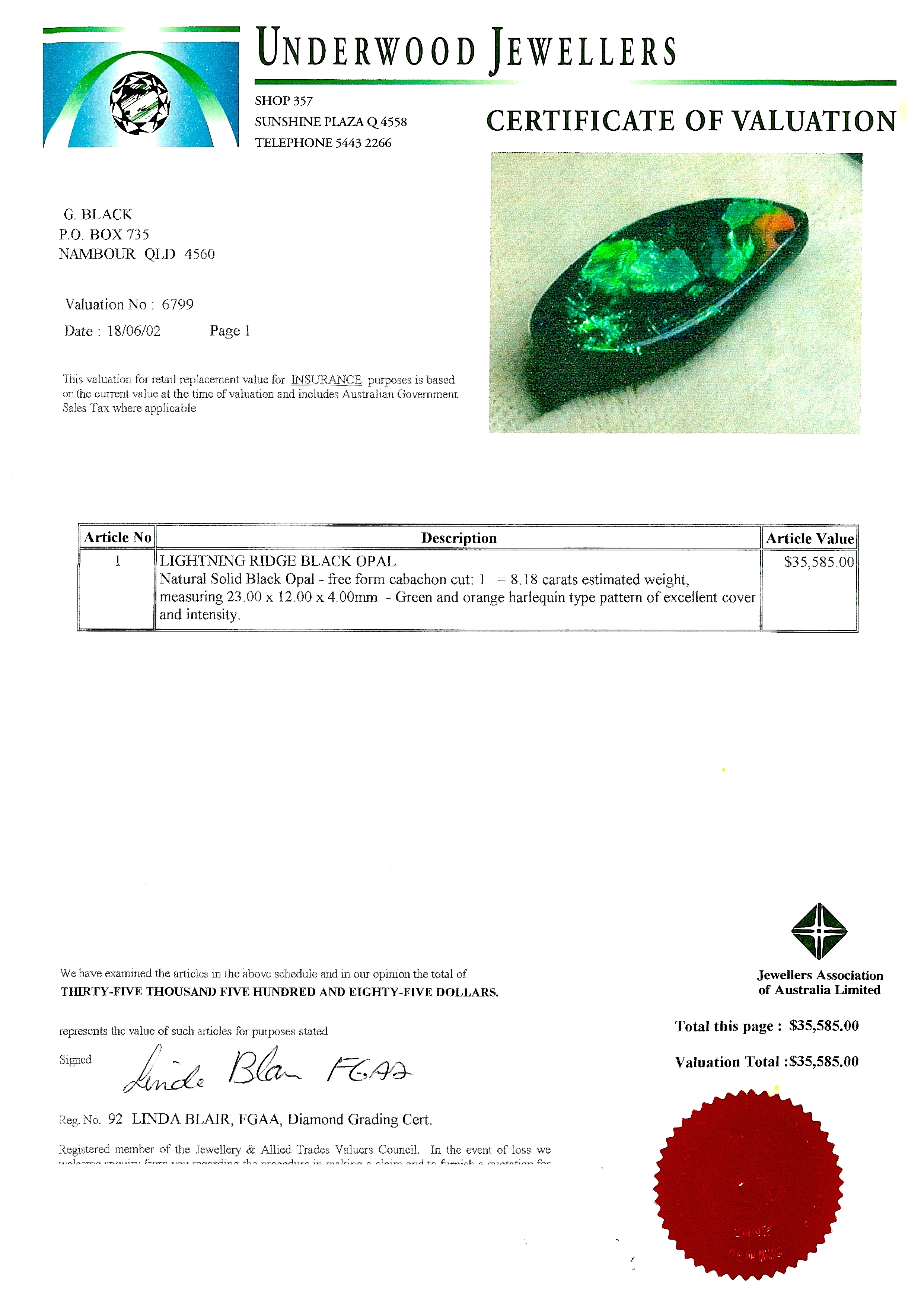 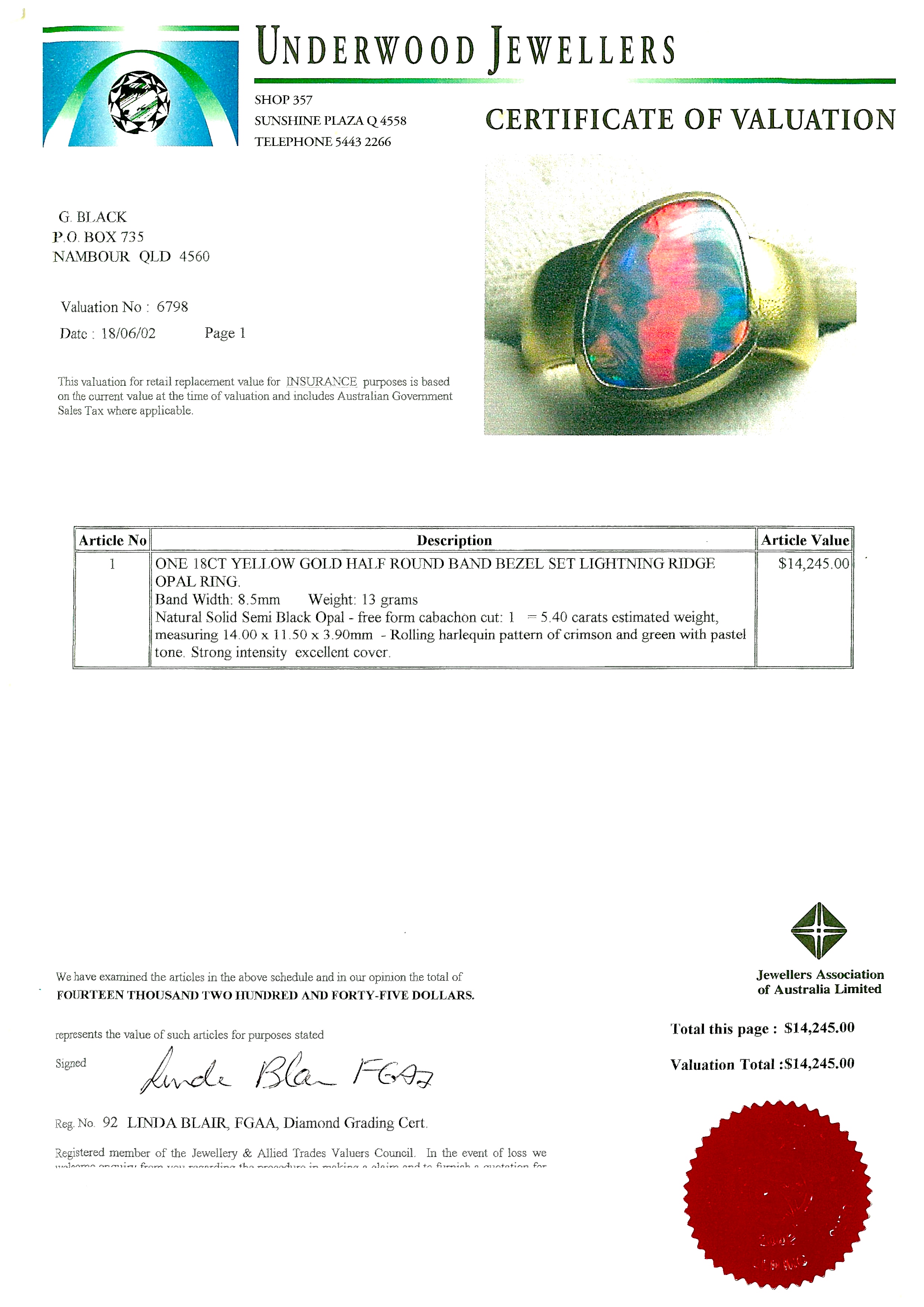 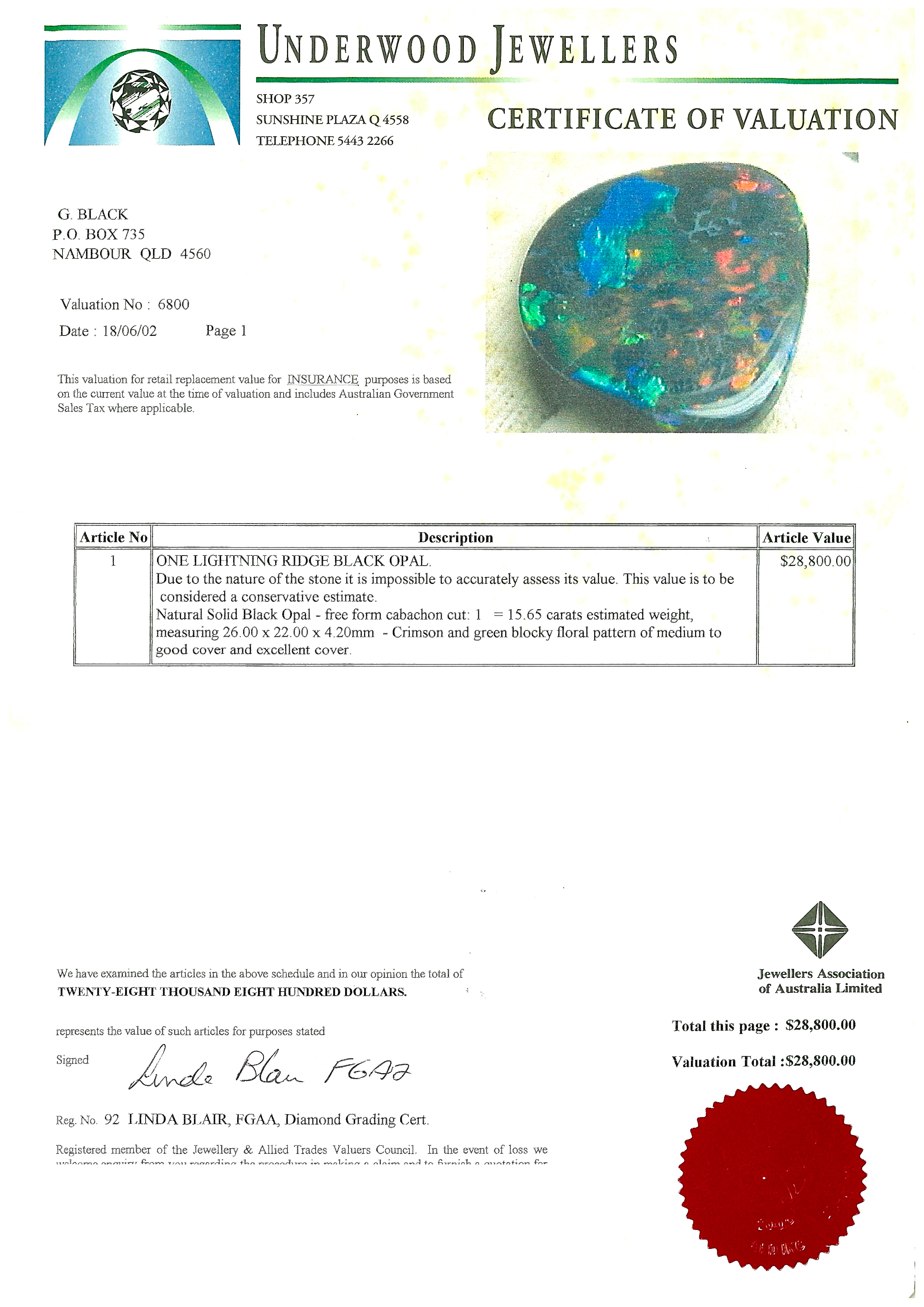 THIS PAGE HAS COPY RIGHTS.