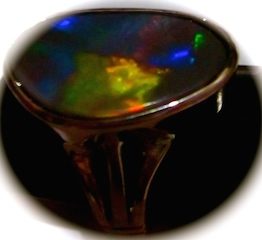 Tucson gem show Australian handmade rings but lot cheaper hear because you have gone direct to the primary producer goldsmith handmade ring designer,  that open cut his own Australian opal mine. Here you are going direct wholesale prices to Mr Graham Black site and shopping cart, with the best deposit of Australian opals ever discovered from the only official government Heritage listed opal mine in the country of Australia, Heritage listed because the quality is the best deposit of opal gemstones ever discovered anywhere in the world. Sale 75% Savings Off your own free personal custom design, if you purchase one of our wholesale opals over $199 US, goldsmith make free your choice in design pendant or Australian opal ring, you pay International going price for gold or silver, delivery insurance free to your address.

Tucson gem show Arizona USA starts late January 23 through to the 12th,Mr Chap you will find his 22nd Street show-booth A 113/A 115, you can ask him about all Graham’s gemstones on the video. Graham’s 3 mile heritage listed famous gemstones mine, official Government special gemstone site location in Australia.

Tucson gem show can be expensive but Graham’s website is the most affordable way to purchase, lot of cost traveling to Tucson jewelry show & all cost must passed on. And traveling to Australia and the outback will cost you a lot of money in a lot of time.

Opals Australian National Women’s basketball team name Opals, Head coach Jan has one gemstone from Graham’s famous gemstone mine, which is next door to where the famous opal named Halley’s comet, the Guinness book of world records opal.   Australian opal rings and handmade opal wedding rings  the head coach stated Graham’s Opal jewelry will remain Jan’s preferred lucky opal jewelry to wear with pride . The coach has carried and worn a piece of lucky opal jewelry during all the major campaigns whilst coaching the Australian Basketball team, throughout Jan’s world Championships of 2002, the Athens Olympics of 2004, medal 2006 World Championships and Silver in Beijing Olympics.

Tucson Gem Show there are many gem shows around the world, Germany has a big show Hong Kong, China and Bangkok jewelry Expo, and many more jewelry International exhibitions, designers showing off magnificent gems from around the globe, beautiful rubies and jadeite from north of Thailand Burma. From the country of Sri Lanka sapphires, Australia magnificent black Opal and crystal opals. Tucson Arizona gem show starts late January 23 through to the 12th, and Mr Chap will have some of Graham’s 3 mile heritage listed opals from Australia, you will find his 22nd Street show-booth A 113/A 115. Chap understands the primary producing industry of gemstones he cuts all his own, and carves magnificent carvings designs, all his own jewelry designs and is an expert on all gemstones minerals from around the world.
You will find many of the world’s gemstone buyers and dealers will travel to Tucson gem show, but also gemstone collectors from all around the world know about this famous gem show an exhibition of rare unusual fossils.

The American Tucson show has the most spectacular opal fossils that has recently been discovered, along with fossilized dinosaur remains that were alive over 100 million years ago are at Tucson Arizona fossil mineral gem show, you can purchase fossils for next to nothing and then on the other side of the coin, more expensive fossils then you could imagine but there is something for every body to take home. You have semiprecious gemstones that will have a budget to suit everybodys pockets, and then the pressures rare and very expensive variety of gemstones where 5 ^ Ruby can cost you $30,000.

And then you could see one 5 ^ gem quality multicolor predominantly red black opal with spectacular Harlequin pattern perfect shape $50,000, jadeite the Chinese will pay the same sort of money as a great quality investment 5 ^ diamonds, wow that will set you back some money, you can see all this happening in front of your eyes. There are people individuals at the show that can afford such gemstones for their wives and love one’s, top end jewelers and designers from around the world also travel to Tucson show to purchase such valuable gemstones.

Tucson jewelry and mineral show you will see so many different displays of handmade commercial grade jewelry for everybody, and you will also see jewelry Booths with the finest handcrafted rings custom jewelry with sparkling gemstones. You have to see the famous American Tucson Arizona gem show to truly grasps the unique exhibitions, and how big the show is because you could spend a week wandering around Just looking.

This gem and jewelry show will have some of the best jewelry designers from around the world showcase new designs for 2017, and along with all the classic jewelry designs of past jewelry gem shows.

Tucson Arizona gem show starts late January 23 through to the 12th, and Mr Chap Will be talking to Buys from China European Union countries Britain and jewelers from the Middle East and Asia. Information about Graham’s famous 3 mile heritage listed opals from Australia, at 22nd Street show-booth A 113/A 115. You will find Chat and very engaging expert with some of the best in most affordable prices at this year American Tucson gem show.

Opal ring handmade and good-quality Opals have always been very difficult to find around the world extremely limited supply of black opals, so QueensLand Boulder opals are the big winner, people paying big money for boulder because the Australian governments environmental laws, in the southern and smaller States of Australia are more easily policed.

It has become more difficult for small mining guys to operate in the smaller more heavily policed southern states, with mining cost going through the roof, workplace and safety regulations putting more Financial precious and costs on the small guys. Plus the very unusual big supply of Ethiopian cheap opals, that is mostly controlled by Indian guys, that cut Polish and control A lot of the Wholesale market. Ethiopian opals took over the Australian market in United States of America, during the USA deep depression in recent times. 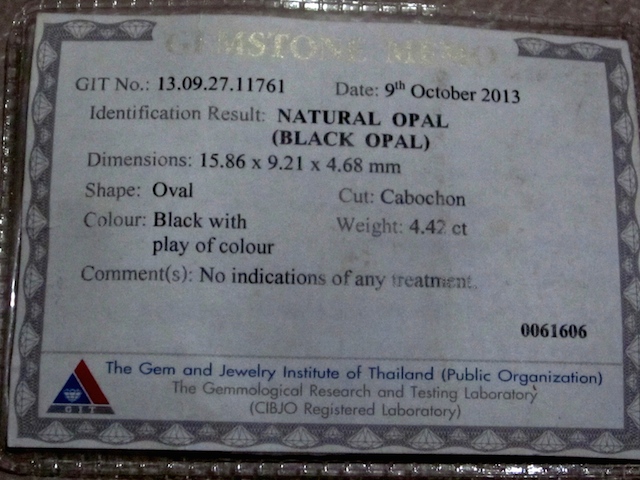 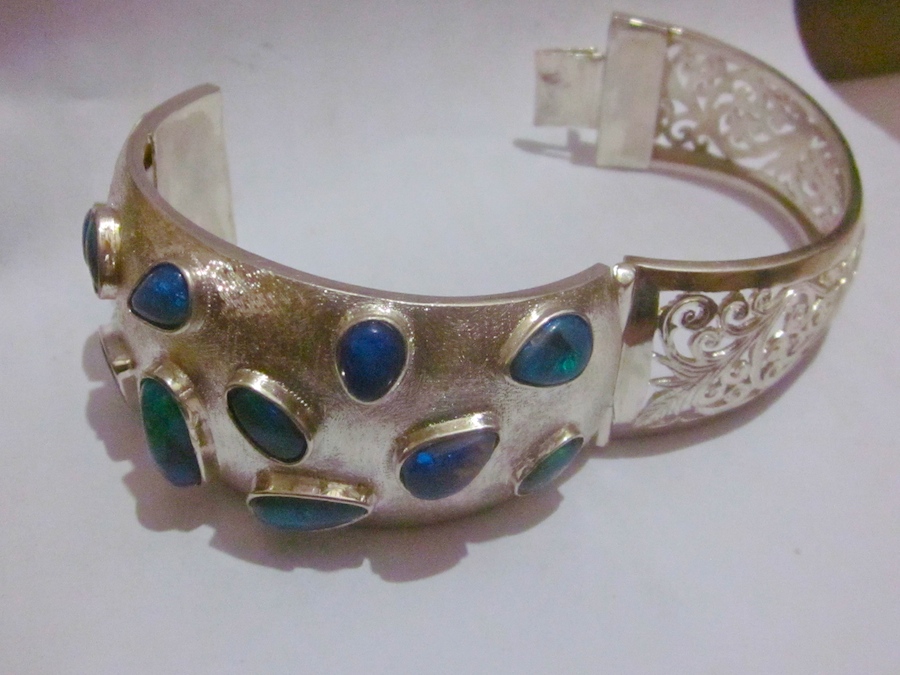 Beautiful bracelet in Silver with opal gemstones at the Tucson gem show.

These days now jewelers around the world understand why it was priced differently much more inferior deposits, but its to late the supply has dried up and no one’s mining in Australia. This is why in the North the tropical huge state of Queensland Australia that nearly joins to the country of Indonesia, people can still operate and are finding QueensLand Boulder opals, every one is getting great prices so they are the big winner these days. But nothing compares to beautiful southern Crystal opal and the very famous black opals that Graham discovered, but now the famous area and Township is depleted and no one much is prospecting developing new deposits.
Graham’s website is by far the most affordable way to purchase, as there are lots of cost incurred in traveling to Tucson jewelry show, and this is why you’re paid much higher prices at the Tucson show, and traveling to Australia and the outback will cost you a lot of money, so Information about Graham’s famous 3 mile heritage listed opals from Australia, at 22nd Street show-booth A 113/A 115 Tucson gem show.

About Tucson the second largest populated city in Arizona in the country of America and then Phoenix,the city is located 108 miles southeast from Phoenix north of the Mexico border. And how do I get to this famous gem show I hear you say, directions from downtown Tucson take S 6th Avenue and please go south and then you turn left on E Irvington Road after that you will arrive at 3750 E Irvington Road . Some more history Tucson is the 33rd largest city, and also the 59th largest metropolitan area United States of America, or otherwise known as the USA.

Towns outside the city of Tucson or the metro area include Benson southeast, Green Valley to the south Catalina Oracle north of the state. There is plenty of accommodation to suit all budgets from five-star four-star three star and even cheaper, plenty of transport back and forward to the gem show from downtown, Tucson has an international airport with all the amenities shopping facilities parking. And why you’re out there are many amazing things to see and do, group tours the people are friendly with a great climate, excellent restaurants again all types from local American food to international meals, Chinese Southeast Asian meals, you can get takeaway àrlacat the best available in the world or simply meals to suit every budget possible.

So it does not matter what country you come from you can fly direct in from little-known cities in South East Asia like northern Thailand cities like Chiang Mai, so if this is possible then you can just about book a flight in from anywhere in the world, Australia airports in Sydney Melbourne and Perth will take you to Tucson Arizona jewelry show, and of course France has flights, London to easy direct to Tucson, Germany and most of the European Union have flights direct to Tucson Arizona fossil and gem show, Russia flights no problem China most of the city’s flights no problem to Tucson Arizona gem jewelry show. You can arrange most of your hotel commendation simply on the, Internet trip advisor is a good site and there are many more online booking sites, and of course your local travel agents can book you the flight with accommodation packages.
This way you can pay cash if you prefer or do not have a Visa or MasterCard – American Express and all the other cards, where online these days debit cards are still possible but credit cards are better, in America cash is still king so do not worry if you have Chinese money, or hard currency from the European Union, Australian dollars Japanese yen it does not matter there are many money currency changing locations in Tucson, and if you’re buying jewelry and gemstones you can always haggle if you have cash and cut out bankers fees which are only getting higher and higher as the years go on. Tucson Arizona jewerly show is a very safe place which ever way you do business, so please come along to the famous biggest American show at Tucson gem show.