Ring opal beautiful and the gemstone was first found and discovered in Lightning Ridge 1880s, there is a story that Mr Charlie Nettleton was the first guy to sink the first opal shaft in1903. By about 1909 1910 from other mining feels in this state and other states like South Australian the local population rose to 1,000, the miners expanded there operations out of town about 10 km to the famous 3 mile now Government Heritage listed and then further on to 4 mile, 1920 the opal mining fields slowed right up little production was coming out of town and the surrounding areas. About opal rings and opal jewellery.

Prior 1958 the English and Germans where the big buyers of opal gemstones and later on the scene the Americans buyers purchase Australian opals. But 1958 demand for this gemstone and mechanisation mining machinery, along with the price of black opal underground mining was quite active in and around lightning Ridge, the famous claim named Scotts at 3 mile was open cut by a guy simply named big bill and mining around 1970s. Japanese economy was booming and Japanese buyers were the biggest buyers of this gem from about 1979 to about 1995, Opal cut mining took off in a bigger way and the 3 mile became the biggest black opal pit in the history of this industry and now is Heritage listed and a State Museum the capital Sydney is being built next door to Graham Black 3 mile Heritage mine.

The Lightning Ridge Brothers that found the Guinness book of record black opal gave me this video they were working with me on my mine just before & not long after they passed away. I still have the State Heritage Listed opal mine in the same area where the brothers discovered the largest uncut Black opal in modern times at www.grahamblackopal.com.

Japan economy started slowing up and so did the Japanese buyers, since this time on the Americans where the biggest buyers but after the prime crisis in the USA and the collapse of there dollar Americans have slowed up. 1990s the best source of opals were discovered since the original Lightning Ridge mines, about 20 minutes west and the other side of the Corcoran Lake. This deposit put the whole industry and area back on the International gemstone map, but since then the industry has had its own problems with government regulations tightening up workplace and safety restrictions, along with very strong environmental regulations and International fuel prices going through the roof.
The Russians showed a lot of interest in the best quality deposits of opals known in the world, and that naturally only comes from Australia. About 2006 Russians were traveling for the first time since the collapse of the commonest System in their country, but since the economic restrictions replaced on Russia because of the issues in Ukraine, there currency has dropped and they are not travelling outside Russia so much any more. 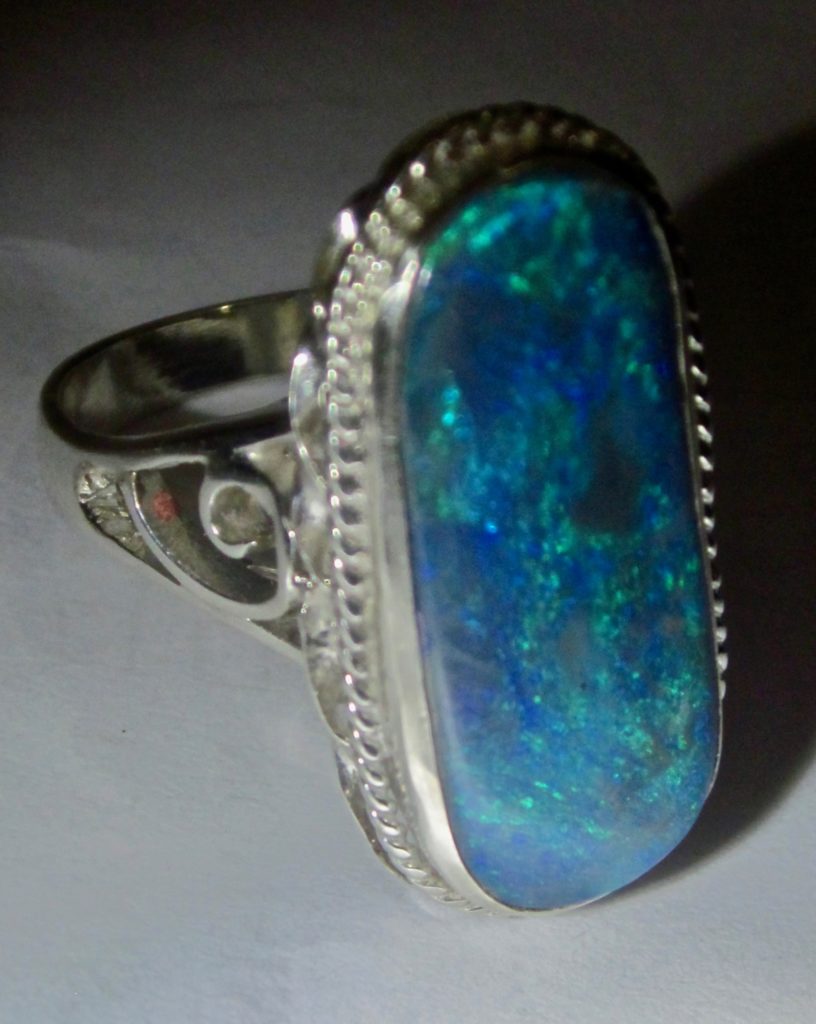 But as the Chinese economy took off like a rocket, jewellers from big city Shanghai and Beijing started travelling and learned about Australian opals, so the China become the major opal consumer from there on but about 2012 Chinese economy started slowing up and naturally the buyers started to slow down trips to Australia. But as the opal mining industry has slowed up because of very tight regulations and price becoming too expensive to operate mines, so deposits are becoming scarce so prices have kept stable and will in the future. They’re such a big demand these days with globalisation and International travel and not a lot of Australian opals available these days will ensure good quality opal will always maintain its price.
Lightning Ridge has opalized fossils under the earth on gigantic dinosaur bones, opalization made these objects into precious gemstones. The Sydney palaeontologist based in town at the Australian opal centre, they do a lot of biological research. Some Lightning Ridge opal are 3-D and once a living creature or dinosaur. Sydney palaeontologist love the transparency bones shells fossils allows Sydney palaeontologist to see through them without damaging any precious opals, but studying non-opalized fossils have a lot less advantage for scientist, so Lightning Ridge is the place to visit when you travel to Australia if you are a gemstone and particular opal lover.